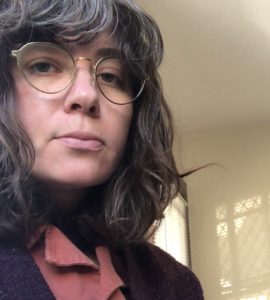 This post was written by Alyssa Loera (@_misterDNA_), who was selected to be one of this year’s DLF Forum Community Journalists.

Alyssa Loera is a librarian and information technology specialist living in Los Angeles, California on the unceded, ancestral, and traditional territory of the Tongva/Gabrieliño peoples. She received her MLIS from the University of North Texas, and a B.A. in International Development Studies (with a minor in Film & Television) from UCLA. She works as the Digital Services & Technology Librarian for the California State Polytechnic University, Pomona and has been working in libraries and archives for 14 years, with most of that time spent in academic environments. Alyssa’s research interests include information systems, scholarly communication, digital collections, digital repositories, and how technology pervades human and non-human life. Alyssa is also deeply interested in making, creating, building, and forming radical futures through the continued dismantling of supremacist structures (in libraries and beyond).

The throughline for DLF this year was clear for me (and I imagine for others as well): members of our information-oriented community are already, or at least on their way, to thinking less about the individual and more about the collective and the commons. As an early/near the middle of their career librarian, it can be hard to find direction amid the noise of imposter syndrome, lack of mentorship, and the numerous broken foundations on which librarianship is built. In my experience, offerings like DLF often present an honest shift of perspective. We come together to show what both progress and different approaches can look like, in theory and in practice.

There are three sessions that solidified the overarching themes:

Showing Up: Caring for Each Other During Messy Times delivered as the closing keynote by Nisha Mody.

The first session raised a lot of questions, personally. Strong, critical questions, that are mostly facing inward (to the self and to the institution). When it comes to memory and information institutions, who defines the commons? Who creates and maintains them? Who funds them, and when they fund them how then does power fall? The boundaries of libraries and archives are predefined by the system in which they were first developed, an often capitalist, euro-centric, productivity-centered system. The aforementioned presentations focused on a future where we as practitioners, administrators, technicians, etc., instead center the community as well as the individual user, all the while reclaiming that which capitalism has rooted down in hegemony and now needs remediation.

As stated in the Open to All? presentation, “We must allow communities to organize and design their own governance solutions.”

It is easy to feel powerless, especially in a time when the hierarchies laden in the average institution are leveraging their power to maintain the status quo. The message above harkens back to the commons, this notion that we can step in and hinder the co-opting of aspects of our work, or at least better understand what the system is and does, creating more space for change. In some cases, the workers are the community and they should be a pillar in the solution’s design. The content creators, the maintainers, and the users have long been siloed from each other in ways that prevent real infrastructure change or even fortification of the things we know need attention. Eira Tansey honed this part of the conversation in on staffing in a way that particularly resonates in our labor-troubled times, and how weakening that pillar has come to deflate the “commons” as we know them to be in memory and information institutions.

In Feminist Revisions, the presenters asked us to consider how digital technologies fit into bigger systems, and how digital scholarship service models can be designed in ways to better support the community (and also the commons). “Expectations of our faculty don’t align with material reality,” noted Anne Cong-Huyen. That frank observation was refreshing to hear, and seems like a secure step into realistic maintenance and growth. The organization the group went on to describe was scoped so properly, and defined so well, that it felt like they had taken their community and their needs seriously. They are applying the small shifts being offered by many DLF voices from over the years.

Nisha Mody brought together the interplay between supporting the commons, and care. We cannot care for the commons, both in the metaphorical and spatial sense, without caring for each other. We are more than our institution and more than our jobs, and Nisha Mody’s Venn diagram regarding showing up can help us all stay connected to vital interdependence. The moves we make can support these efforts in both small and large ways, from supporting your colleagues and demonstrating boundaries to standing up against unfair labor practices and changing national standards. We have been shown the theories, the stories, and the practices behind care work. We’ve been offered examples, as well as questions that will guide us to look deeper within ourselves and critically at the institutions we work for. These three sessions in particular show how centering care and investing in the commons are parts of the future we are looking for. 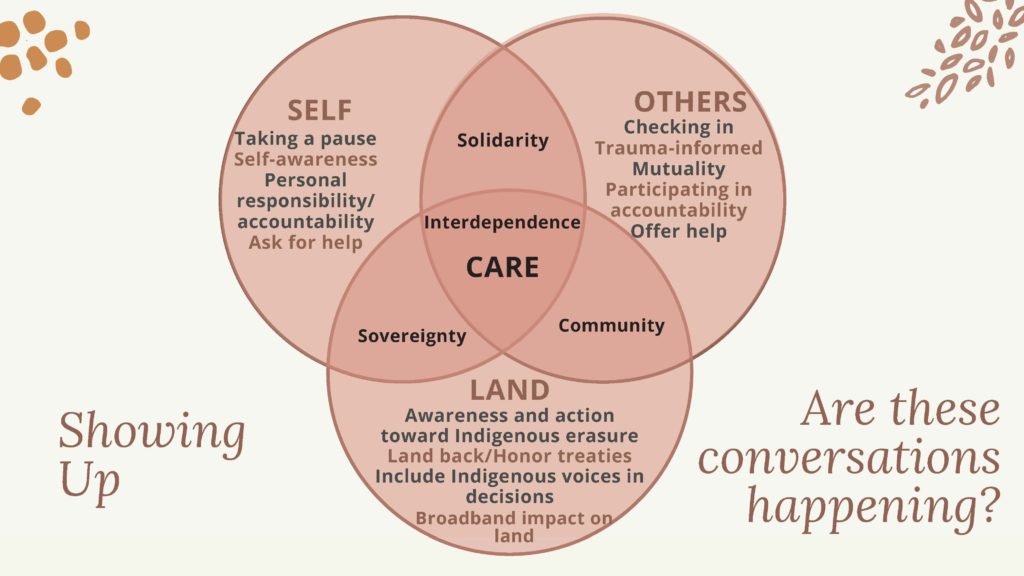