This post was written by Michael B. Toth. Michael is President of R.B. Toth Associates. He has provided technical and management support for advanced digitization programs for over 20 years in libraries around the globe.

As I boarded my flight to Tampa at Washington Dulles Airport, I wondered what my first Digital Library Federation Forum meeting would be like.  I didn’t have to wait until arrival in Tampa to find out: as I sat near the front of the aircraft, numerous fellow passengers greeted the person sitting next to me as they boarded.  I finally turned to her and asked if they all worked together and were heading to a meeting.  She noted they were all heading to the same conference in Tampa: the DLF Forum.  I noted I was headed there as well and it would be my first, to which she noted: You’ll love it – it’s a great group of people!  That brief prelude to the DLF Forum proved to be an accurate introduction.  When I arrived at the Forum it was indeed great to see the informal interactions as well as the session presentations and discussions on important issues for digital libraries.  I was also impressed with the leadership role of CLIR in making sure the Forum addressed all the needs and goals of such a diverse group.  CLIR did amazing work organizing the Forum in such a relaxing venue, while somehow avoiding the worst of hurricane season and Florida heat (waterview photo attached from my morning stand-up paddleboarding). 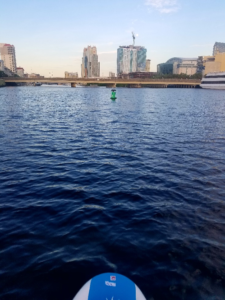 With so much going on, I obviously couldn’t be everywhere, nor reflect more than my own DLF novice perspective on the Forum.  With my two decades of work on preserving technical data for future generations, I was pleased to see one area of focus reflected in several sessions and the interests of over five dozen participants at the DLF Forum and, of course, DigiPres: the need for sustainable data repositories and digital preservation. Many participants cited the importance of workflows, open access, and prioritization.  One topic I did not hear addressed was the importance of standards to ensure collections could be preserved for future generations in a form and format that is both machine-readable and comprehensible for humans.  All the best workflows, collection plans, and prioritization will only yield effective results when the data are accessible to users and their technology for years to come.

Giao Luong Baker of Duke, Uwe Bergmann of the Stanford National Accelerator Laboratory, and I attended this year’s Forum to highlight how advanced digitization systems can offer new insights into library collections when used effectively with integrated data, program management, and cross-disciplinary skills. Yet, equally important was for us to understand the DLF institutions’ and users’ resources and needs for technical solutions. Many institutions simply do not have the resources to capitalize on advanced digitization technology, despite the need. This highlighted the potential for some institutions (perhaps on a regional basis) to serve as technology centers where their imaging systems could be available to support under-resourced institutions, perhaps on a cost sharing basis or as research grant partners. This could allow smaller institutions to tap the infrastructure and technology available in better-resourced institutions to support digital research into collection items.

One topic that I was disappointed to not hear discussed at the Forum was a key ongoing legal case that could determine public accessibility to government documents, with potentially far-reaching impact on libraries and government records transparency. Supreme Court of the United States Case 18-1150, Georgia v. Public.Resource.Org, Inc., notes “The question presented is: Whether the government edicts doctrine extends to—and thus renders uncopyrightable—works that lack the force of law, such as the annotations in the Official Code of Georgia Annotated.”  On the final day of the DLF Forum, the American Library Association filed an amici curiae brief in support of the lawsuit and allow free access to the official code of a state. They note:

“Citizens patronize libraries to access and learn about the law and their government. Citizens also rely on libraries to preserve our cultural heritage, including our nation’s laws. By reaffirming the government edicts doctrine, the Eleventh Circuit’s decision assists libraries in fulfilling these roles. The “force of law” standard pressed by the State of Georgia, on the other hand, would implausibly exclude important portions of the law from the public domain, and would do so in a confusing, unadministrable manner. The ensuing un-certainty would undermine libraries’ ability to connect citizens with the law. Amici thus respectfully request that the Court affirm the Eleventh Circuit’s decision that the Official Code of Georgia Annotated (“O.C.G.A.”) falls under the government edicts doctrine, and thus is, in its entirety, not copyrightable.”

On 2 December I attended the Supreme Court oral arguments in this case.  The Justices’ questions did not fall along the frequently cited conservative and liberal positions, but ones of authorship and online access. During these arguments in the beautiful Sienna marble courtroom, I reflected upon the sincere concerns, ideals, and goals of the DLF members and Forum participants that are at stake.