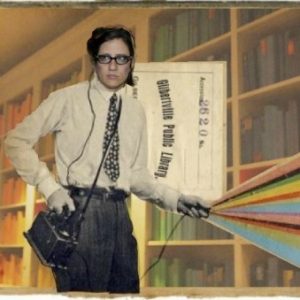 Rachel Mattson (@captain_maybe) is Manager of Digital Projects at the Archives of La MaMa Experimental Theater Club, as well as a member of XFR Collective. Rachel was a Virtual Cross-Pollinator between DLF and AMIA, and attended both conferences in person.

“Can We Center an Ethic of Care in Audiovisual Archival Practice?”

I spent the second week of November 2016 attending archives conferences. From Monday to Wednesday, I was in Milwaukee at the Digital Library Federation Forum. Wednesday through Saturday I was at the Association of Moving Image Archivists Conference in Pittsburgh. In addition to presenting on several panels at both events and leading a couple of meet-ups, I was also tasked with serving as a DLF-AMIA virtual “cross-pollinator.” As such, I was meant to pay attention to, describe (using Twitter, in-person conversation, and whatever other tools I could find), and create linkages between the many conversations happening at both events. (Hashtag: #AVHack16.) I was all set for an intense week of thinking, scheming, and learning.

But then, the second week in November 2016 was also the week of the US presidential election, and partway through the week, we learned that Donald Trump won the electoral college. So the intensity of my week got kicked up a few notches. In the end, it was a sleep-deprived six-day stretch in which I felt near-constant political rage and panic. Meanwhile, I filled my brain with new information and ideas, connected with several remarkable communities of archives/library practitioners, and considered the work to come.

The scope of what I learned and considered and wondered about that week overwhelms; there’s just no way to legibly do justice to all of the challenging conversations and ideas from the week in one short blog post. But a person has to try something. So I’ve created an epic but heavily curated Storify of Tweets from the conferences (available for public viewing here). And below, I offer a brief (and partial and incomplete) consideration of the core idea that emerged for me as most urgent and overarching from the week’s events. That idea is this:

There’s no place in our work for the pretense of neutral professionalism. We need to articulate and deploy professional standards and models that place care-giving, justice-seeking, and community-oriented frameworks at the center of our practice.

This point was most overtly and articulately made by Stacie Williams in her DLF keynote “All Labor is Local.” Drawing on the work of scholars like Amelia Abreu, Michelle Caswell, Safiya Noble, and others, Williams offered a vision for a new kind of professional model built on a)recognition of the often invisible care work that others do to support our families and our work, and b)an ethics of care.  “How many of us have been a part of digitization projects,” Williams asked a room full of digital archivists and librarians, “where the work [was] performed at-will by workers with no job security who were paid the barest of minimum wages…[or by] people in prisons, disproportionately black and brown citizens who are unlikely to ever be offered jobs in the cultural heritage institutions that used their labor once they are released?” And “How many of our organizations have made it harder to serve our local users because of extreme cuts to their workforces or because they replicated systems of hiring that rewarded those who best perform very specific racial, gender and class standards?”

The answer, Williams recognized, is most of us. And although we work in a system that replicates “harm, not care,” it is within our power to change the terms of our work. Even as we are pressured to “deliver more results with fewer staff and less money,” we can find ways to perform our work in a way that values and cares about people in our local communities, and attends to their survival and their struggles. “Let’s value the people” Williams implored. “Care for the people. Be a reflection of the care you received or that you want to receive. And let that radiate out in our local communities as a radical expression of love, empathy and service.”

These themes re-emerged and gained new depth for me over and over again across the rest of the week. At the DLF, participants repeatedly called for practices that value “people not tools,” and considered the ethics of our practices. A panel on “Ethics and the Digital Library: Building, Framing, Interacting” considered the ethical issues “embedded in building digital libraries in diverse contexts.” Can we share stewardship with the communities documented by our collections?, panelists asked. Can we prioritize the project of liberation as we work to collect and preserve? A panel on “Email/Ethics” included in a presentation on the ethics of archiving Tweets. “When individuals share their stories on a public platform, have they given professionals implicit permission to take them? Should we ask first?” “Digital Libraries and the Politics of Labor” investigated the unjust digital labor practices on which Amazon.com’s “Mechanical Turk” labor system relies. A panel on “Digital Privacy” – which took place just as we were learning the results of the presidential election – cautioned us about the dangers posed to individual privacy by widespread institutional use of Google Analytics and Ancestry.com. (Slides from these and other DLF presentations are available through the conference repository, here.)

At AMIA, participants engaged in sustained considerations of diversity and inclusion, amplified the voices of community archivists, and called for more holistic digital preservation practices. The conference’s opening plenary, “Action for Diversity, Inclusion and Equity in AMIA,” featured tactics-oriented presentations by a remarkable array of AMIA members and allies, and was followed by post-plenary working sessions designed to move the organization to take productive steps toward making good on these proposals. (You can view the presentation that XFR Collective’s Carmel Curtis gave as part of that panel here.) A special all-day Do-It-Yourself and Community Archives Symposium (DIY&CA for short) – organized by members of AMIA’s Independent Media Committee – lifted up the voices of community archivists and activist media makers. The stream was open to local Pittsburgh residents free of charge, and included presentations by activist Pittsburgh-based documentary filmmakers Chris Ivey and Tony Buba; “real talk” by archivists from the People’s Archive of Police Violence in Cleveland and Third World Newsreel; a feminist command-line scripting skillshare; and other presentations. (Several of these presentations were livestreamed and recorded; those recordings are available here.) Elsewhere at AMIA conversations were happening about guidelines for handling archival material by or about the indigenous Yacqui people; about where we fail our graduate students; about establishing A/V archives educational programs in Latin America; about improving the organizational code of conduct; about the ways in which one-size-fits all digital preservation standards do a disservice to community-based collections. (I’ve assembled Tweets relating to many of these presentations in my conference Storify, here. Collaborative notes from the conference are available here.)

For me, the idea that we should center an ethic of care and justice-seeking in our work isn’t a new one; its a big part of my motivation for doing this work in the first place, its how I wish to practice and live in the world. (It is also part of the mission and practices of the XFR Collective.) But I’ve never seen it emerge so visibly in a professional context before, and I’ve never heard it described with such care and detail by my thoughtful and smart colleagues. There’s tons more I could write about where and how I saw the idea emerge and gain meaning over the course of the week.  I’m especially grateful for the friends and comrades that I got to sit next to, chat with, learn from, and practice solidarity with during that time. But the upshot is just that evidence of the need for a new, care-centered, justice-seeking, and community-oriented framework for our labors was visible at nearly every turn.

Kelly Haydon, who works at Bay Area Video Coalition in San Francisco and who co-chaired the committee that organized the DIY&CA stream for this year’s AMIA conference, offered a set of comments during her Friday presentation that felt to me like a nice end bracket to a week of asking questions about how we might deploy an ethic of care in our work. (The presentation was part of a panel called “Real Talk: Archiving Independent Media and Community Collections” and can be viewed here.) Her talk, “One Has a Moral Responsibility to Disobey Unjust [Best Practices]” argued that archivists have a role to play in social justice movements – and that “we can’t let unattainable best practices get in the way” of that work. Best practices are “unjust,” she said, when they are used to shame managers of projects that can’t afford to implement them; when they are used to interrupt the flow of excitement surrounding a grassroots or activist archival project; and when they become such a burden that they interfere with the critical work of making vulnerable and valuable community-based and independent collections accessible and available into the future. And because they are used by what she called “a certain strain of archivist – usually, but not always, a white man who has been working in the field a very long time – [as] a license to intimidate” they often impede conversations about what sorts of creative, feasible alternatives to best practices we can develop. Many of us are “afraid to reveal what [we’re] doing in my archive because if [we are] “wrong” [we] will be shamed,” Haydon observed. We need to resist this, she insisted; we need instead to “fight insecurities and not be afraid to ask questions.”

In conclusion, she said:

“Let’s figure out how we can build models and materials that help communities seize momentum and build active, living archives.”
View Rachel’s Storify from the week here.