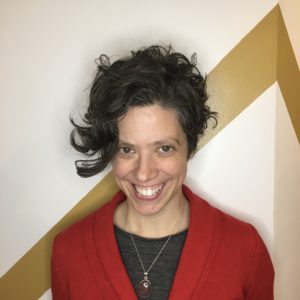 This post was written by Julie Rosier (@redthreadtweets), who attended the 2022 DLF Forum as a Public Library Fellow.

Julie Rosier (she/her) is an aspiring digital archivist, who will receive an MS in information science with an archival focus from the University at Albany, SUNY in May 2023. She received her BA in history and Spanish from the University of Michigan. She works as a Circulation Assistant at her local public library in Northfield, MA, where she recently initiated a digital archives project to provide greater access to the library’s special collections. She also volunteers on an oral history project in conjunction with the 350th anniversary of the town. Before her recent pivot into the library field, Julie worked in higher education administration, including roles such as producer at the Juilliard School and associate director at the UMass Labor Center. Her passion for history, archives and technology has been nurtured over the years by her work as a writer, activist and community-accountable scholar. She is a strong believer in the power of stories, and in 2004 founded a company, called Red Thread Commons, to document community history from the ground up.

I am new to library and archives conferences. However, in the six weeks leading up to the DLF Forum, I attended SAA’s annual meeting and a symposium co-hosted by New England Archivists and Simmons in Boston, and Simmons in Boston and was disappointed by the predominance of whiteness in those spaces. Looking around the room at the Forum’s Opening Plenary in Baltimore, I felt grateful for the number of BIPOC colleagues in the room. It felt like a step in the right direction toward a more balanced and just representation of racial diversity.

As the conference continued, I enjoyed content that spotlighted African American history. The talk Magnifying Gwendolyn Brooks featured a team from the University of Illinois Library at Urbana-Champaign. They discussed digitizing the papers of the Pulitzer prize-winning poet. They also outlined technical challenges related to converting the pièce de résistance, a scrapbook that the team came to call the Red Album, into appropriate digital surrogates. In the end, they created a composite view to capture the entire album layout, and an item view to browse individual photos. The team mentioned the importance of cultivating a strong relationship with Nora Brooks Blakely, Brooks’ daughter, whose input in describing the photos was indispensable.

Tilting the Lens to Black Lives: Using Public Open Digital Scholarship to Develop Student Skills and Deepen Community Engagement was another presentation that I enjoyed immensely. Willa Tavernier, the Research Impact & Open Scholarship Librarian at Indiana University Bloomington, discussed her project, Land, Wealth, Liberation: The Making & Unmaking of Black Wealth in the United States. This work brings to light stories of how the racialized US socio-economic system affects black communities. Tavernier and her diverse team of students and colleagues used digital placemaking to foster engagement. They built a multi-modal exhibit on Omeka S, leveraging tools like TimelineJS and embedded audio from SoundCloud. With the goal of “re-presenting” history, Tavernier’s team created a timeline with labels such as, “Reconstruction to Tulsa” and “Urban Renewal and the Civil Rights Era” to foreground “how public policies prohibited Black Americans’ ability to own land or homes.” According to the project’s homepage, the team offers this digital resource “as a means of fostering intercultural understanding, in the hopes that it will spur meaningful conversations, and help explore paths and policies to achieve reconciliation.”

On the final day of the Forum, Jennifer Garcon presented her work in Building/Digitizing/Preserving Community Archives. She demonstrated her use of lightweight, inexpensive digital technology and preservation techniques to recover and document the lived experiences of Philadelphia’s Black and African diasporic residents. She also discussed her collaborations with Re/Member Black Philadelphia, a project out of Penn, and the Archives for Black Lives Philadelphia (A4BLiP), a loose association of over 75 information professionals responding to the issues raised by the Black Lives Matter movement. In response to an audience question about grappling with problematic actions taken by the University of Pennsylvania and Princeton University regarding the remains of child victims from the 1985 MOVE bombing, Garcon replied that academic institutions must do the work to reckon with their legacies of harm in surrounding communities. Garcon also expressed gratitude for her connection to the A4BLiP network, which allows her to deliver institutional resources directly to Black communities while promoting a post-custodial approach to community archiving.

Overall, I was excited to witness Women of Color practitioners working in opposition to archival silences and institutional erasure of African American history. Whether amplifying the legacy of an influential poet like Gwendolyn Brooks, shining a light on the oppressive impact of centuries of racialized US socio-economic conditions on Black wealth, or operating pop-up digitization sites for community members who have rightly lost faith in institutional repositories, these projects inspired me to the core. I hope to follow in their footsteps as an emerging archival professional committed to walking a path through hard truths.

This post was written by Evelynn Cuautle (@evelynn_ctle), who attended the 2022 DLF Forum as a Grassroots Archives and Cultural Heritage Organizations Fellow. My name

This post was written by Dr. Clarissa West-White (@clarissawhite), who attended the 2022 DLF Forum as a Historically Black Colleges and Universities (HBCU) Fellow. Dr.