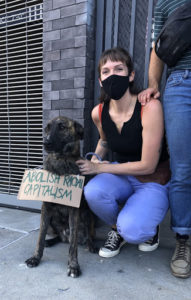 Terra Graziani is a researcher and tenants’ rights organizer based in Los Angeles, CA. She founded and co-directs the Los Angeles chapter of the Anti-Eviction Mapping Project (AEMP), a digital storytelling collective documenting dispossession and resistance in solidarity with gentrifying communities through research, oral history, and data work. She is also a researcher with the UCLA Institute on Inequality and Democracy and The Center for Critical Internet Inquiry at UCLA. Before this, she organized with AEMP in the San Francisco Bay Area and worked for several tenants’ rights organizations including The Los Angeles Center for Community Law and Action, The Eviction Defense Collaborative and Tenants Together. She is currently Research Program Officer at Educopia where she works to cultivate community in the information field. Terra earned her Master’s in Urban and Regional Planning at UCLA and her Bachelor’s degree in Social and Cultural Geography at UC Berkeley.

Tell us a bit about your projects and how you became interested in issues of data privacy, collection, and surveillance.

One of my first jobs in the tenant movement was Community Outreach Coordinator at The Eviction Defense Collaborative (EDC) in San Francisco, a legal clinic where anyone who has received an eviction notice goes first to get immediate help responding to their eviction. I was responsible for writing EDC’s annual eviction report, which analyzed the data EDC collected through its clinic to provide a picture of displacement in San Francisco. To make this report, we partnered with The Anti-Eviction Mapping Project (AEMP), and the rest is history! I joined AEMP shortly thereafter and began to learn — both through the research and visualization I was doing with AEMP, as well as through the experiences I was having working with tenants facing eviction at EDC — all about eviction data! Since then, I’ve worked in various roles in the tenant movement organizing against displacement and building power through knowledge production around issues of tenants’ rights, our speculative and racist housing system (market), police and property, policing technologies, and so much more. I spend a lot of time thinking about how we can mobilize data to build power from below, rather than to surveil and punish.

How does the concept of “endangering data” arise in your work?

Early on, I learned that the most commonly-used data set on evictions comes from the courts, and that each county’s courts has a different data management system that has a huge impact on how accessible that data is. I also learned that, in California, there is a masking law that prevents court eviction records from being made public. As the article states, before this masking law was passed, “under longstanding California law, records in eviction lawsuits [were] kept sealed for 60 days after they [were] filed. On the 61st day, the court clerk look[ed] to see if the tenant prevailed. If not, the record [became] public — even if there [had] been no ruling in the case, and even if the landlord [had] abandoned the lawsuit.” After these 60 days, names of those who had lost their case and been evicted would be published, third party companies were taking and publishing this data, and landlords would subscribe in order to blacklist tenants. A tenants’ record and credit score could be affected for up to 7 years, significantly impacting their access to housing, which is already so hard to secure. With the new state law, which took effect in January 2017, the landlord would have to win the case in those 60 days for the record to be made public. The law is still not perfect, as tenants still avoid taking their cases to court where, if they have access to an attorney (also a huge problem) they could get a better outcome, for fear of losing and getting an eviction put on their record, but the new laws protect many more tenants from being blacklisted.

This masking law is a double-edged sword, though, because it also means those within the tenant movement who want access to court eviction data, including AEMP, have a very hard time getting it. There is an exemption to the law that grants access to “a person who has an order from a court, issued upon a showing of good cause.” This is the exemption AEMP used to get a court order to access the data in Alameda County. In San Francisco, the court has a practice of sharing address-level eviction data with the rent board, who then we request the data from through public records’ request. The format of the data we receive from these public bodies is all over the place and often takes months of work to make it usable. In sum, the data management and sharing practices of public institutions are so variable and have a huge impact on the work we can do.

One of my many jobs at EDC was to help re-vamp their intake form, meaning I was helping shape what data we collected on tenants facing eviction in San Francisco. I still think about this process often, because working with clinics and tenant organizations to mobilize their data is one way AEMP has been able to visualize a more holistic data set of evictions. If we only look at eviction data from courts, we’re only representing those tenants who made it to court. So many tenants are forced out informally, through intimidation, harassment, informal buy-out offers etc., none of which are captured by court data. Some of this is recorded in clinic records where tenants have gone for help. Another way this is helpful is that many clinics collect demographic data. EDC’s data taught us, for example, that in 2015, compared to the city’s population, Black residents were overrepresented by 300% in their eviction records. Race and other sociopolitical aspects of the displacement crisis are not at all captured in court records.

We are still very far away from having holistic, community-controlled, non-punitive data on evictions, but this is the work AEMP is always engaged in. We collect, mobilize, and preserve data for justice, by and for those who face or have faced displacement. And we’re always collectively evolving our practices on how best to do this.

How have you used data to fight for greater justice?

Wahoo, you’ve given me some space to talk about making property ownership data public!

It is extremely difficult to track the real, or “beneficial owner” of rental property in our communities, because property owners are able to hide their identities by purchasing and owning property behind LLCs. Currently, owners are not required to disclose their real identity when they register an LLC or purchase a property. This anonymity in the public record is not an oversight – it is by design, and property owners benefit enormously from it. When a tenant is facing eviction, and they only know their landlord to be an LLC, they have to do a lot of work to figure out who to put pressure on to drop their eviction. In order to unveil and hold accountable the increasingly corporate actors who control so much property in our neighborhoods, municipalities around the world should demand the disclosure of beneficial ownership in both companies and property ownership.

The Anti-Eviction Mapping Project has worked for years to unveil property ownership webs in the San Francisco Bay Area, Los Angeles, and New York so that tenants can use this information to fight displacement. We’re building a tool (which is almost ready!) called Evictorbook, which allows you to search a property, see who the real owner is, and see the property’s eviction history as well as whether or not its covered by rent control, and a few more details. So much data is collected on tenants, particularly by the real estate industry. Evictorbook aims to keep track of landlords and gives tenants a tool to fight back with.

You and your colleagues on the AEMP team have written in multiple places[1][2][3] about the need for grassroots, community based work. What steps can we, as academics and information professionals, take for more equitable and democratic data practices?

Several members of AEMP, myself included, straddle academia and organizing work. Mary Shi, another AEMP member, and I recently published an article in ACME: An International Journal for Critical Geographies entitled, “Data for Justice Tensions and Lessons from the Anti-Eviction Mapping Project’s Work Between Academia and Activism.” In it, we talk about what we’ve learned from straddling these two spaces, focusing on mutual aid, accountability, and embeddedness as guiding principles to producing knowledge outside of academia. I’ll share our conclusion here, which I think sums up the article nicely:

“It is no accident that AEMP, as a project fighting displacement, finds itself straddling  the  space  between  academia  and  activism  with  its  epistemologically critical perspective.  Like traditional,  objectivist  knowledge,  displacement  is  a strategy  of  violence  through  erasure.  Resistance,  therefore,  requires  strategies  that fight   this   erasure   at   each   point.   Countermapping,   story-telling,  and   deep collaborations with community organizers are all strategies AEMP has developed to fight such erasures at multiple levels. And as the guiding principles of mutual aid, accountability,  and  embeddedness  illustrate,  it  is  not  only  the  critical  nature  of AEMP’s  tools  but  also  AEMP’s  constant  assessment  of  its  work’s  impacts  as measured  from  the  perspective  of  the  communities,  organizers,  and  activists  it  is meant to serve that allow AEMP to pursue its mission of producing data for justice.”

Projects   like   AEMP   are   being   offered   new   opportunities–often   by sympathetic insiders– to take advantage of the centuries of resources accumulated by universities,  research  institutes,  and  other  such  organizations  in  pursuit  of  their critical objectives. AEMP recognizes these as redistributive opportunities that should be taken with eyes wide open. In  this spirit, AEMP  continues straddling the space between academia and activism despite the challenges this position entails. The path AEMP has discovered in navigating this terrain is not disavowal and exit but rather constant critique and strategic engagement. We offer our reflections not as an end-all-be-all  guide  for  scholars  seeking  to  do  critical,  community  engaged  work,  but instead  as a sharing of the surest signposts we have discovered along the way. As more scholars reevaluate the way they study changing urban landscapes in particular and  the  relationship  between  academia  and  activism  more  generally,  we  hope  this piece can contribute to the forging of a more just and reparative relationship between academia and the publics it serves.”

I’ll also share AEMP’s Data Use Agreement, which we’ve formulated over the years and welcome questions, concerns, and feedback on.