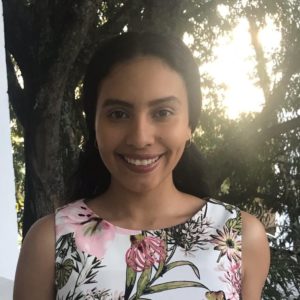 This post was written by Ana Hilda Figueroa de Jesús, who was selected to be one of this year’s virtual DLF Forum Community Journalists.

Ana Hilda Figueroa de Jesús will be graduating next spring from the Universidad de Puerto Rico in Río Piedras with a BA in History of Art. Her research interest focuses on education, accessibility and publicity of minority, revolutionary Puerto Rican art including topics such as race, gender and transnationalism. She has interned at Visión Doble: Journal of Criticism and History of Art, and volunteered at MECA International Art Fair 2019 and Instituto Nueva Escuela. Ana works as assistant for the curator and director of the Museum of History, Anthropology and Art at UPR. She is currently a Katzenberger Art History Intern at Smithsonian Libraries.

Community, a repeated concept during the 2020 Virtual DLF Forum, transitioned from a word to a mantra. From my home in Puerto Rico, I listened and learned from peers who shared their professional and academic experiences. It was my first time attending this Forum. Lots of questions popped into my mind, particularly: Why would staff insist on creating a virtual “community,” of four days duration, with an audience currently experiencing and being exposed to social injustice within their surroundings and media? What does “building a community” mean? 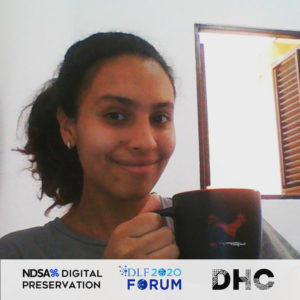 I would like to thank the DLF staff’s commitment. When I received notice that I was selected as a Community Journalist, my first observation was my last name. The correct spelling and grammar of my name are much more than my cover letter, it represents and brings value to where I come from and those who came before me. I noticed the correct inclusion of the accent mark on “de Jesús.” In that moment I knew my voice would be respected in the discourse. The physical distance between attendees was no obstacle. The Forum implemented digital platforms such as Slack and Aviary. Presentations included transcripts and, since they were previously recorded, I could pause and rewind the video when a new term was introduced. If anyone had a tech problem or just wasn’t familiar with the apps, staff was available to help immediately. Each speaker mentioned their preferred pronouns and acknowledged the indigenous homelands from where they spoke. Being inclusive both in theory and practice was a priority. As a Puerto Rican woman of color with low resources, a first-generation college student and an undergraduate scholar, I saw benefit in this opportunity.

The Forum sessions reminded me of particular aspects of archives as spaces of data justice, cultural and social responsibility, knowledge production, and alternate historical narratives. In Mitigating Bias Through Controlled Vocabularies, Juliet Hardesty explained the importance of being conscious of racial categories, first nation groups, non-binary people, and others when including metadata such as subjects, genres, and languages. As an example, she discussed linked data across institutions and the distinction between “exactMatch” and “closeMatch.” Through this conference, I sought to learn and carry out new interdisciplinary perspectives in my roles as a Katzenberger Art History Intern at Smithsonian Institution Libraries and as an Assistant to the Curator and Director at the History, Anthropology and Art Museum of the University of Puerto Rico. One of the most relevant presentations for me was Curationist: Designing a Metadata Standard and Taxonomy for an Open Cultural Ecosystem by Sharon Mizota. She explained the anti-colonialist, anti-racist, feminist, queer, accessible, and multilingual lens of data. Also, she examined taxonomy guidelines that included sensitive subject areas. To illustrate this, she reflected on adopting the terms “Latinx” instead of “Latino” or “Hispanic,” and “homeless people” instead of “homelessness” or “tramp.”

I also attended discussions of human rights movements such as BLM, Community Activism and Digital Archiving in the Era of George Floyd. Other social matters were considered in the lightning talk titled Pandemic Pivot: How to Take Your Event Online, Reach New Audiences, and Build Even Stronger Communities, and the panel Creating a Virtual Community for Virtual Reality: Challenges and Solutions for Program Building During a Pandemic. Another engaging talk was US Latino Digital Humanities: Recovering the Past, Creating the Future. I would like to mention a crucial keynote by Dr. Linda Garcia Merchant when discussing Chicana feminist scholar Maria Cotera, [The importance of understanding] “the archive as a living active experience of “encuentro” between the present and the past, with the potential to enact new strategies of allegiance and a new praxis”. I believe that this idea of encounter is linked with the DLF Forum’s “building a community” proposal.

We must review our reactions and interactions with each other, including those within academia. Our involvement with the writing of histories makes us judges of how and what is told. Something I learned from this experience is that beyond our professional responsibilities, we have a social contract and accountability. Information must be accessible to traditionally marginalized public. Stories, agents and terms that once were excluded from the official narrative must be taken into consideration. The 2020 Virtual DLF Forum included more than spaces for education. It was about feedback, mutual aid, being open to new perspectives, and building a community.