Just about four months ago at the CNI Fall 2013 Membership meeting Cliff Lynch delivered his opening Plenary Address, in which he outlined three areas of opportunity for our profession today: library collaboration, data management, and scholarly communication. These three important points formed a thematic focus throughout the 2-day conference, and they were bound together by the strong CNI community. 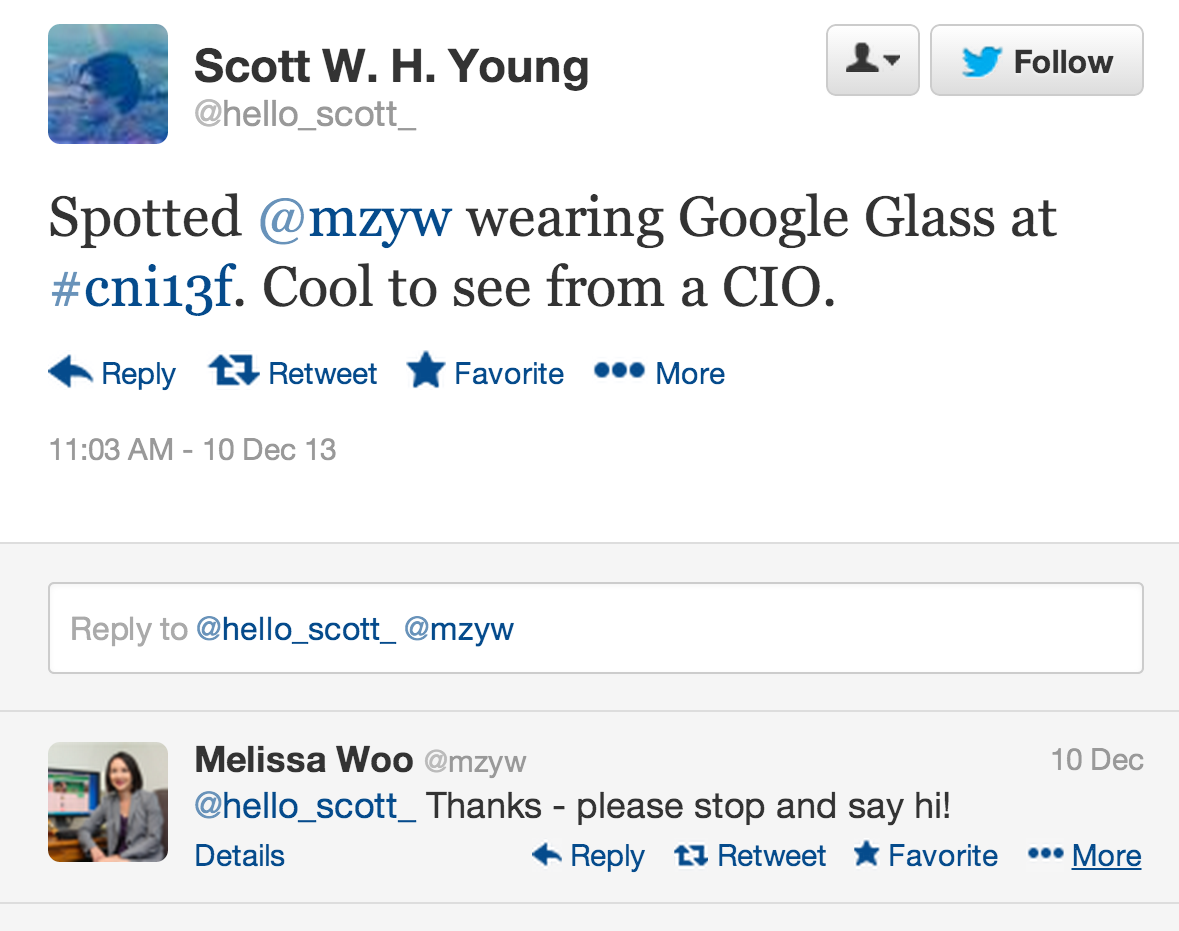 Like any great conference, a primary benefit comes from interacting with fellow attendees. In addition to the excellent project updates and plenary addresses, a great value of CNI lies in the variety of attendees. During those two days in December we encountered representatives from IMLS, NISO, CLIR/DLF, OCLC, and Ithaka S+R, along with attendees from universities and libraries of many sizes. While the CNI roster includes a good number of deans and directors, (as one often hears), we also spoke with department heads, mid-career librarians, and a handful of librarians newer to the profession. With such an array of attendees, the energy of the conference is overwhelmingly open and participatory. For instance, after I noticed University of Oregon CIO Melissa Woo walking the conference corridors with Google Glass, I communicated to her through Twitter, which in turn prompted an invitation to introduce myself. For a CIO to reach out to a second-year librarian says a lot about Melissa, but it also speaks highly of the spirit of CNI. CNI is unique is allowing these kinds of interactions to occur between attendees of different backgrounds.

In addition to  the openness of the conference, there were several other attractive aspects of CNI Fall 2013. First, we had the ability to talk directly with funding agencies. The Fall 2013 Membership Meeting hosted a panel where representatives from the Institute of Museum and Library Services (IMLS), the National Endowment for the Humanities (NEH), and the National Historical Publications and Records Commission (NHPRC) spoke about agency priorities, new requirements for the assessment of grant work, and implications for funding. Hearing directly from these representatives allowed us to shape and improve our own grant application efforts this year.

Another component to the Meeting that was incredibly valuable was the fact that projects and ideas being presented were in their early phases. CNI encourages presenter’s to bring ideas early to the community and as a result the sessions are focused on beta implementations or early release projects and research. The Databrary project from New York University and Penn State University was just one example of this prototyping. The project looks to answer the question of open sharing and preservation of video in the sciences. The idea is rich and already has momentum, but the role of CNI in creating more momentum for good ideas is the real advantage here.

As we mentioned earlier, the CNI roll-call does include a good number of deans and directors which does offer some real benefits. Most importantly, it provides the opportunities to get your ideas in front of people who are making decisions. Our presentation at the Fall Meeting on early-stage research to build a better book in the browser led to a valuable interaction with ACRL publisher Kathryn Deiss. 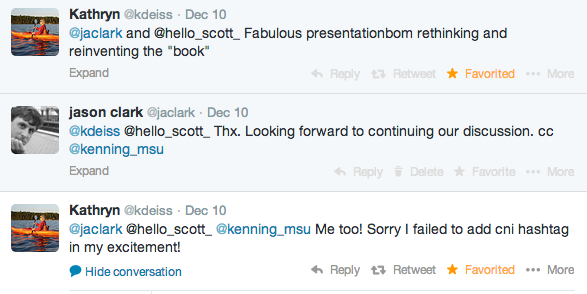 Beyond the positive reaction to our “presentationbom” [sic], we had a great follow-up conversation with Kathryn that has created a possible partnership with ACRL. Our interaction at CNI has placed the idea in front of people within our profession that have the ability to support it and take it beyond a prototype.

Based on our experience at CNI Fall 2013, here are a few ideas for getting the most out of the CNI Membership Meetings:

We hope to see you at future meetings!

Jason Clark: Jason is the head of Library Informatics & Computing at Montana State University Library, where he builds library web applications and sets digital content strategies. You can find him online at http://jasonclark.info/ or on Twitter @jaclark.