Northeastern University’s Snell Library has responded to its increasingly innovative, interdisciplinary, and use-inspired research community by leading the way in redefining modern library service. The Library is prepared to meet the needs of over 23,000 Northeastern students, researchers, faculty, and staff in part by expanding its digital initiatives; developing its digital repository, digitizing unique collections, constructing integrated collaborative spaces; and fostering the adoption of digital media and the creation of new knowledge.

Northeastern researchers are pushing disciplinary boundaries in many fields, including the digital humanities, computational social sciences, and network science. The Library’s Digital Scholarship Group (DSG) partners with these research efforts through an agenda of applied research that draws upon a wide range of expertise in data modeling, digital publishing, digitization, metadata, text encoding and user experience, and by running workshops, hosting scholarly events, collaborating with other units on campus, and by offering practical help with traditional and evolving methodologies. The DSG directly supports two important projects at Northeastern – the Boston Marathon Bombing Archive and the Early Caribbean Digital Archive – and will continue to expand its portfolio in the coming years.

The Library’s digital repository, the Digital Repository Service (DRS), is instrumental in supporting many of the DSG’s projects and initiatives. The original DRS was developed in 2010 as a simple proof-of-concept Fedora digital repository, which quickly became a popular storage solution for several campus departments, including the University Office of Marketing and Communications and Archives and Special Collections. In summer 2013, the Library started work to develop a more robust repository using the Hydra framework. Officially launched in October 2014, the DRS feature set supports many common repository functions, like searching and browsing, and various download options, including a bulk download queue and a “Save for Later” function. The DRS also has a variety of ingest methods, including individual faculty self-deposit, regular bulk deposit for photograph collections, and back-end ingests for complex projects. 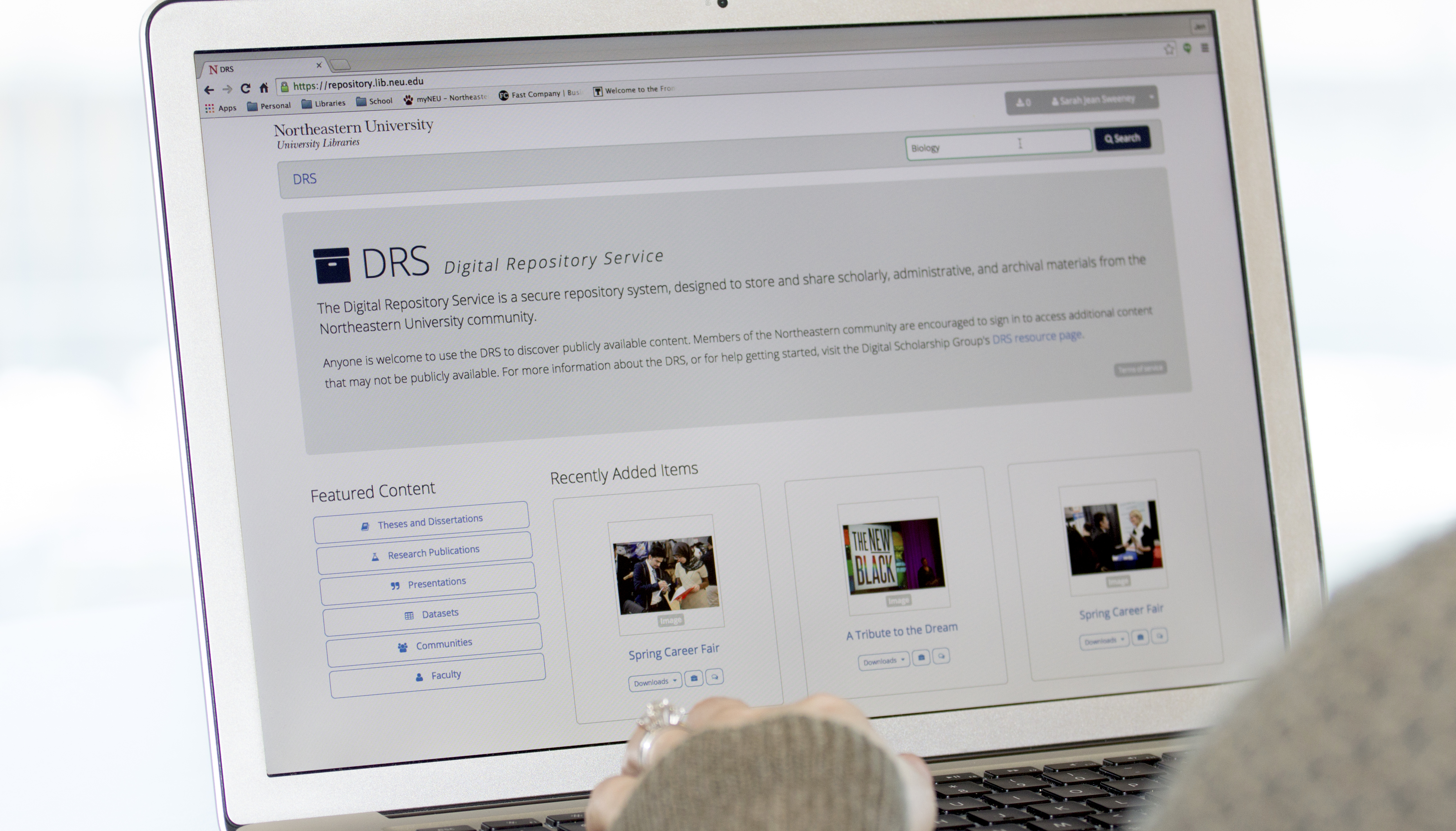 The DSG views the DRS as a solution to a broad set of modern digital problems, including instability and insecurity of basic file storage, the concern over the ephemerality of digital material, and the difficulty of sharing materials with various scholarly audiences. The DSG uses the DRS to directly support the Northeastern community by offering simple storage and preservation solutions for the growing collections of digital material. In early 2015 the DSG introduced a new project initiative called the DRS Project Toolkit. The DSG’s primary goal in developing the DRS Project Toolkit was to align practical file storage and preservation with the active use and reuse of valuable scholarly and archival digital materials.

DRS Project Toolkit is the general term used to describe the integration of DRS content and project-controlled web publishing tools. On its own, the DRS acts as a storage and preservation tool and can accommodate basic repository functions. The Toolkit uses a custom built API to access objects stored in the DRS and display them in WordPress, allowing designated projects to customize how users view and interact with their digital content.

The DRS and DRS Project Toolkit are realizations of the Northeastern University Libraries’ efforts to support Northeastern’s expanding research environment. Over the past six years, research at Northeastern University has exploded, and continues to rise, with an 82% increase in research expenditures from 2006 to 2013-2014. Undergraduate research is also on the rise; 45% more undergrads presented at Northeastern’s Research, Innovation, and Scholarship Expo in 2014 than in 2012. Snell Library is proud to reflect the ethos of its community by building and customizing resources such as the DRS and DRS Project Toolkit in-house and aims continue to provide services and resources commensurate to the demands of a global research university. As DLF members, we look forward to taking advantage of the highly collaborative environment fostered by the DLF to connect with our peer institutions and enrich the landscape of digital scholarship.

For more information about Snell Library, the DSG, or the DRS visit http://library.northeastern.edu or http://dsg.neu.edu