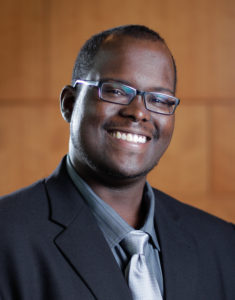 This post was written by Jerrell Jones (@j_digilib), who attended the 2022 DLF Forum as a Student Fellow.

Jerrell Jones is a digitization specialist, professional photographer, and fine art creator. He earned a Bachelor of Fine Arts degree in photography from the University of North Texas and is currently pursuing a Master of Science in Information Science from the University of North Texas. In addition to a decade of academic library service, he has served through roles in the oil and gas sector and mental health rehabilitation field focused on building sustainable partnerships across institutions, companies, and non-profit organizations. Jones is currently contributing to the University of Houston (UH) Libraries as Digitization Lab Manager where he previously served on the Libraries’ Committee on Diversity and Inclusion and currently serves on the USRA Lunar and Planetary Institute IDEA committee. As a recent ALA Spectrum Scholar, Jerrell continues his pursuit of advancing equity, diversity, and inclusion in academic libraries, digital preservation, and community archiving. When Jones is not thinking about libraries, he can be found developing a roll of film, salsa dancing, propagating plants, and keeping a close eye on commercial airliners or the next space vehicle launch.

The DLF 2022 Opening Plenary was quite engaging and I’ve returned to considering it on several occasions since the conference. The two-panelist format facilitated a vibrant conversation between the panelists that elicited audible positive reactions from the audience, leading to an active Q&A session that left us wanting more – a fantastic way to start a conference. The recurring idea was that the technologies that we’ve come to rely on, even as early as the traditional keyboard, may need a second look to remain relevant, accessible, and effective for the rapidly-changing information landscape ahead of us. Meredith Broussard highlighted that essential equipment like soap dispensers and medical equipment are often designed for users deemed as “standard” which often ignores skin color, sex, body size, and other ways that make us beautifully different. Environments that struggle to accommodate remain behind the curve and as a result, lose their power to connect. David Nemer reminded the audience that social media giants like Meta authoritatively claim that they “connect the world” when in reality, this is not possible because countless communities remain unconnected with the rest of the world based on political, economic, and algorithm-based exclusion. Communities overlap and share common ground much less often than social media claims. A lot of fascinating ground was covered in this opening plenary but what I took away from this conversation was the reminder that information professionals are not off-of-the-hook when it comes to intervening when technologies do more harm than good. Broussard mentioned that artificial intelligence has a racism problem highlighting that as computers get “smarter” they also gain the potential to harm unless humans intervene, an intervention that was deemed essential as we allow these technologies to touch more areas of our lives.

Overall, the most memorable moments of the conference were marked by rich conversations, many of which I had in between sessions, that affirmed my work in equity, diversity, and inclusion at the intersection of library service. I valued the level of transparency many conference attendees provided when they talked at length about the challenges at their institutions, something for which I was grateful. I sat at several tables during the conference filled with brilliant individuals that traveled from HBCUs, explaining the nuances and broader impact of their work that made me proud of them, proud to be Black, and even more proud to be a Black man working in the field of libraries. Quite simply, I was affirmed in my work, empowered in my work, by strangers that gave me no indication that we were not already family. Conferences are wonderful catalysts for connection but they often fail to provide this level of peace and unconditional belonging for diverse individuals.  I was grateful that CLIR invited the 2022 Authenticity Project Fellows and provided ample time and space for these individuals to present their work and engage in a series of conversations that could result in important collaboration for years to come. To date, I’ve never been to a conference in which I felt so seen and utterly excited to collaborate with new colleagues and that experience will remain with me.

Thank you to Texas Digital Library, sponsor of the 2022 DLF Forum Student Fellowships.

This post was written by Evelynn Cuautle (@evelynn_ctle), who attended the 2022 DLF Forum as a Grassroots Archives and Cultural Heritage Organizations Fellow. My name

This post was written by Dr. Clarissa West-White (@clarissawhite), who attended the 2022 DLF Forum as a Historically Black Colleges and Universities (HBCU) Fellow. Dr.

This post was written by Julie Rosier (@redthreadtweets), who attended the 2022 DLF Forum as a Public Library Fellow. Julie Rosier (she/her) is an aspiring