We are delighted to announce the recipients of the National Digital Stewardship Alliance’s (NDSA) annual Innovation Awards!

These awards highlight and commend creative individuals, projects, organizations, educators, and future stewards demonstrating originality and excellence in their contributions to the field of digital preservation.

The awardees will be recognized publicly during NDSA’s Digital Preservation 2017 during the Opening Plenary on Wednesday, October 25. Please join us in congratulating them for their hard work! Each of the winners will be interviewed later this year, so stay tuned to learn more about their work on our blog. 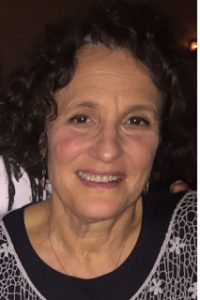 Rebecca Guenther spent most of her career at the Library of Congress in the Network Development and MARC Standards Office developing national and international metadata standards, including MARC 21, MODS, and PREMIS among others. She was co-chair of the original PREMIS Working Group, which developed the PREMIS Data Dictionary for Preservation Metadata, and, after its release, chair of the PREMIS Editorial Committee from 2005-2015. She is currently a consultant on metadata issues and teaches at NYU’s Moving Image Archiving and Preservation Program. She remains active on various metadata committees.Rebecca is recognized for nurturing conversations among international library stakeholders, conversations that led to the development of MODS, MADS and the enhancement of MARC, helping to build a solid foundation for discovery metadata. All of us in the preservation community have benefited from her leadership in the development of PREMIS metadata for digital preservation. 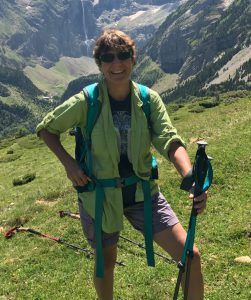 Karen Cariani is the Senior Director of the WGBH Media Library and Archives (MLA) and Project Director for the American Archive of Public Broadcasting (AAPB). Karen has 20 plus years of television production and project management experience, including as project director for WGBH’s Teachers’ Domain (now PBS Learning Media), WGBH Open Vault, the Boston Local TV News Digital Library project; and also the development of a digital media preservation system utilizing the Hydra technology in partnership with Indiana University.She served two terms (2001-2005) on the Board of Directors of Association of Moving Image Archivists (AMIA), and was co-chair of the AMIA Local Television Task Force, and Project Director of the guidebook “Local Television: A Guide To Saving Our Heritage,” funded by the NHPRC and co-chair of the AMIA Copyright and AMIA Open Source Committees.

Karen was co-chair of the LOC National Stewardship Digital Alliance for the Infrastructure working group, and served as president of Digital Commonwealth. Recent projects include WGBH Project Director for the American Archive for Public Broadcasting in partnership with the Library of Congress. .

Karen is recognized for leadership that was crucial in forging a collaboration with the Library of Congress to steward the American Archive of Public Broadcasting, an initiative that has digitized nearly 50,000 hours of historic programming from more than 100 stations.  She has been an advocate for collaboration in the development and adoption of shared open-source solutions for digital stewardship, a leader in the NDSA and Hydra/Samvera community, as well as in the project to enhance the Avalon project with support for PBCore, and in developing open-source solutions for speech-to-text and audio waveform analysis. 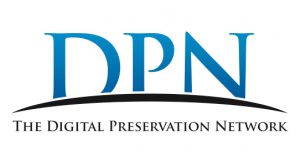 The Digital Preservation Network (DPN) is a membership organization focused on developing solutions to meet the challenges of long-term preservation of academic and cultural heritage digital assets. The large-scale digital preservation services developed by DPN are built to last beyond the life spans of individuals, technological systems, and organizations. DPN provides members of the academy and their successors with assurance that future access to their scholarly resources will be available in the event of disruptive change in administrative or physical institutional environments. By working together, DPN members are collaboratively solving issues that have been difficult to achieve separately.Beyond DPN’s core mission of ensuring the secure preservation of stored content by leveraging a heterogeneous network that spans diverse geographic, technical, and institutional environments, the organization is recognized for its creation, with partner AVPreserve, of its Digital Preservation Workflow Curriculum.  The curriculum/workshop series provides a bridge between the desire to participate in digital preservation projects and the capacity to connect local content and resources to that aim, providing a flexible framework for guiding an organization through the necessary decision making processes for establishing a sustainable digital preservation workflow. Mary Molinaro, Chief Operating Officer & Service Manager, will accept this award on behalf of DPN. 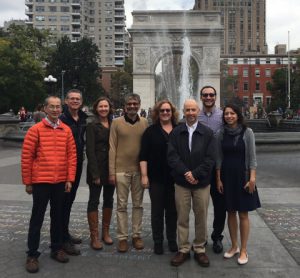 The ePadd project is an undertaking to develop free and open-source computational analysis software that facilitates screening, browsing, and access for historically and culturally significant email collections. The software incorporates techniques from computer science and computational linguistics, including natural language processing, named entity recognition, and other statistical machine-learning associated processes.ePADD Phase 1 was developed from 2013-2015 by staff of the Department of Special Collections and University Archives, Stanford University Libraries (SUL), Stanford University.  The software was developed with grant funding provided through the National Historical Publications and Records Commission (NHPRC). Additional funding was provided through SUL’s Payson J. Treat Fund for Library Program Development and Research.

ePADD Phase 2 is being developed from 2015-2018 by staff of the Department of Special Collections and University Archives, Stanford University Libraries (SUL), Stanford University, in collaboration with partners at Harvard University, the Metropolitan New York Library Council (METRO), University of Illinois at Urbana-Champaign, and University of California, Irvine.  Funding for ePADD Phase 2 is provided through an Institute of Museum & Library Studies (IMLS) National Leadership Grant (NLG) for Libraries, which supports projects that address challenges faced by the library and archive fields and that have the potential to advance practice in those fields.

The ePadd project is recognized for developing an effective, useful, accessible tool that has significantly lowered technical and other resource barriers to appraising, acquiring, processing, and making accessible large email collections for individuals and museums, archives, and libraries, both large and small.  It has served as well, as an effective demonstration of the concrete possibilities of working with born-digital textual collections.  The project team have also been noted for fostering open collaboration, community-building, and support. Glynn Edwards, Assistant Director, Department of Special Collections at SUL, and Project Director, will accept this award on behalf of the project. 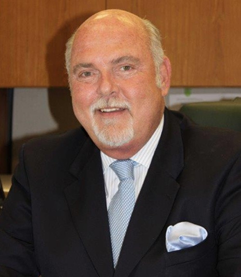 George Coulbourne served as former Chief of Internship and Fellowship Programs at the Library of Congress in Washington, D.C. prior to his retirement on August 31, 2017. Among his responsibilities at the Library George founded and led the international Digital Preservation Education and Outreach (DPOE) Program. In collaboration with the IMLS he designed and launched the pilot program for the National Digital Stewardship Residency (NDSR).  He led and expanded the Hispanic Association of Colleges and Universities National Internship Program (HNIP) for the Library which significantly increased diversity enterprise wide.

During his tenure, George established a number of collaborative fellowships, residencies and internships in collaboration with universities nationwide to promote leadership and skills development for future digital stewards. In addition, he spearheaded the design and implementation of the first public facing internship, residency and fellowship portal for the Library’s 80+ experiential programs. George currently serves on the Advisory Committees for NDSR Art-Philadelphia Museum of Art, the NEH-NEDCC Digital Assessment Training Project and The Washington Consortium of Universities and currently works as an independent consultant.

George is recognized for having established, while at the LOC, the Digital Preservation Outreach and Education (DPOE) program (now a network  of 217 digital preservation topical trainers across 33 states in the U.S., the District of Columbia, Australia, and New Zealand) to advance the practice of digital preservation through professional development opportunities such as the three-day DPOE Train-the-Trainer Workshop. The community recognizes his accomplishment in pioneering the National Digital Stewardship Residency (NDSR) program in collaboration with IMLS to cultivate nationwide talent in digital stewardship through a year-long residency that pairs emerging information professionals with cultural heritage institutions facing an array of digital preservation challenges. 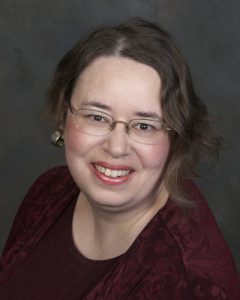 Dorothea Salo is a Faculty Associate in the Information School at the University of Wisconsin at Madison. She teaches courses on metadata, linked data, coding and society, open movements, and digital libraries. She has written and presented internationally on privacy, scholarly publishing, copyright, institutional repositories, linked data, and data curation. She holds an MA in Library and Information Studies and another in Spanish from UW-Madison.In addition to her teaching at the University of Wisconsin-Madison’s iSchool, Dorothea is recognized for partnering with Wisconsin libraries — the Cedarburg Public Library, the Wisconsin School for the Deaf, Mineral Point Library and Archives, and the WYOU community television station in Madison — to provide resources and assist in the digitization of at-risk materials.  Her development projects, RADD (Recovering Analog and Digital Data), PROUD (Portable Recovery of Unique Data), and PRAVDA (Portably Reformat Audio and Video to Digital from Analog), have extended the reach of digitization and preservation tools to those without the resources of large-scale memory institutions. 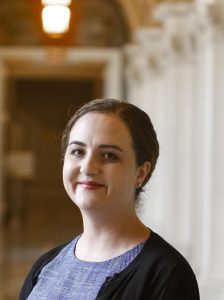 Elizabeth England is the Digital Processing Archivist at the Johns Hopkins University Sheridan Libraries, where her responsibilities include acquiring, processing, and preserving born-digital materials. She previously was a National Digital Stewardship Resident, and her residency project focused on the preservation of Johns Hopkins’ born-digital visual history. Elizabeth holds an MLIS with a concentration in archives from the University of Pittsburgh.

Elizabeth is recognized for her work as a National Digital Stewardship Residency (NDSR) resident at JHU’s Sheridan Libraries, which has significantly streamlined and advanced the JHU archives’ born-digital processing workflow and has motivated the Libraries to pursue grant funding to develop technology that will allow the community to appraise digital visual content in a more sophisticated way using computer vision techniques such as perceptual hashing.  She has organized and chaired a recent panel discussion at the Society of American Archivists’ annual meeting on appraisal of digital content.  And, in response to concerns of loss of crucial climate datasets from government websites, she was one of the organizers of “Data Rescue DC”, garnering international attention.

The annual Innovation Awards were established by the NDSA to recognize and encourage innovation in the field of digital preservation stewardship. The program is administered by a committee drawn from members of the NDSA Innovation Working Group. Learn more about the 2012, 2013, 2014, 2015, and 2016 Award recipients.

The HBCU Library Alliance and the Digital Library Federation are pleased to introduce 10 fellows selected for the Authenticity Project, a mentoring, learning, and leadership

Office Hours for the Levels of Digital Preservation

The NDSA Levels Steering Team is excited to announce the introduction of bi-monthly open office hours. In these informal sessions, we will welcome all members of the